It’s now January, and it’s way too cold to garden. The highs are in the single digits. And so we stay cozy inside, brew a cup of tea, warm up a muffin, and get out the gardening books for inspiration. We like American Grown: The Story of the White House Kitchen Garden and Gardens Across America by Michelle Obama. We found it in the bookshelf left behind by the Browns, the previous inn owners.

We’ve devoured the Kitazawa Seed Company and High Mowing Organic Seeds catalogs. I also found an old book called A Year at North Hill that follows two gardeners, Joe Eck and Wayne Winterrowd, as they refine and restructure their vision through four distinct seasons. It takes place at an elegant, mature garden at North Hill in Vermont. It’s inspiring because it’s similar to where we live in Middlebury and North Hill’s months look a lot like our own.

We’ve also binged on old episodes of Gardener’s World at 50 starring Monty Don and his cast of co-presenters. As good students, we diligently take notes. Although spring comes earlier in the U.K. and winter concludes earlier, the tours of the stately and formal dream gardens are motivating and inspiring. We love a good walled garden!

We love to cook and are planning to plant fresh herbs and vegetable gardens of Swift House Inn for use at Jessica’s and in our own home kitchen. It’s exciting to choose which varieties to plant. We want to start seeds near every possible light source. But it’s still way too early.

Last year, we were so new to gardening at Swift House Inn that we made many rookie mistakes (ugh, the dwarf dahlias were too short to use as cut flowers!). But since then, we have observed the changing landscape along with the seasons.

We’ve taken note of what plants are hardy enough to survive the winters and which species flourished during the long hot summer. We noticed which crops were weak and prone to bug infestations, and which ones thrived (butter lettuce, I’m lookin’ at you).

As soon as it’s warm enough to germinate seeds indoors under grow lights, we’ll get started planting. Here are the vegetables we plan on growing this spring. 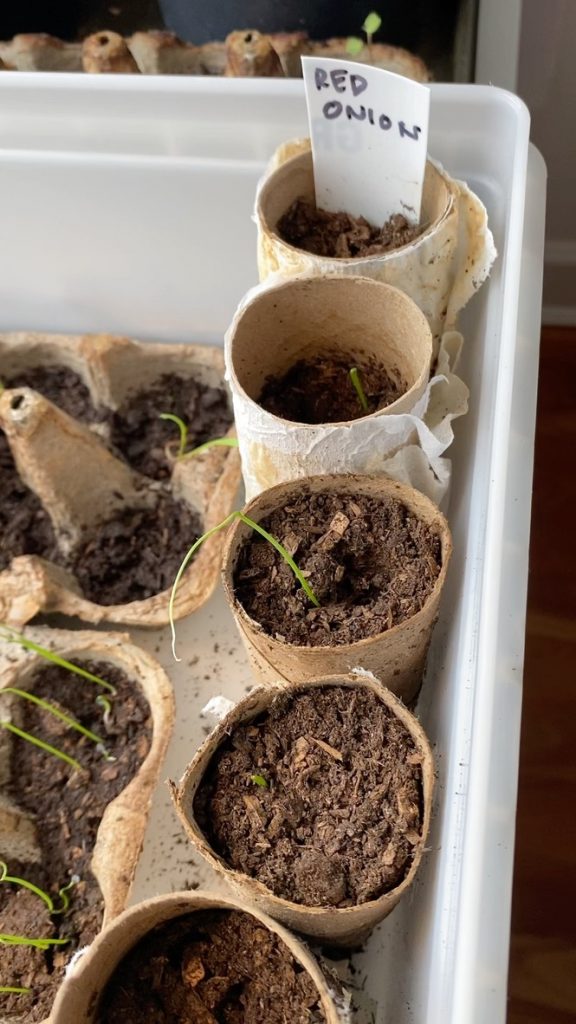 Last year, the tiniest red onion seedlings got their start in toilet paper holders harvested from the employee bathroom.

It takes a very long time to germinate the red onion seed. So at the risk of getting started too soon, which as an eager gardening beaver I’m prone to do, I have already made little seedling plantings out of toilet paper holders nestled inside of an old plastic arugula container. It’s probably way too early, cold, and dark for the onions to start, but they need a lot of lead time, and this could be it. 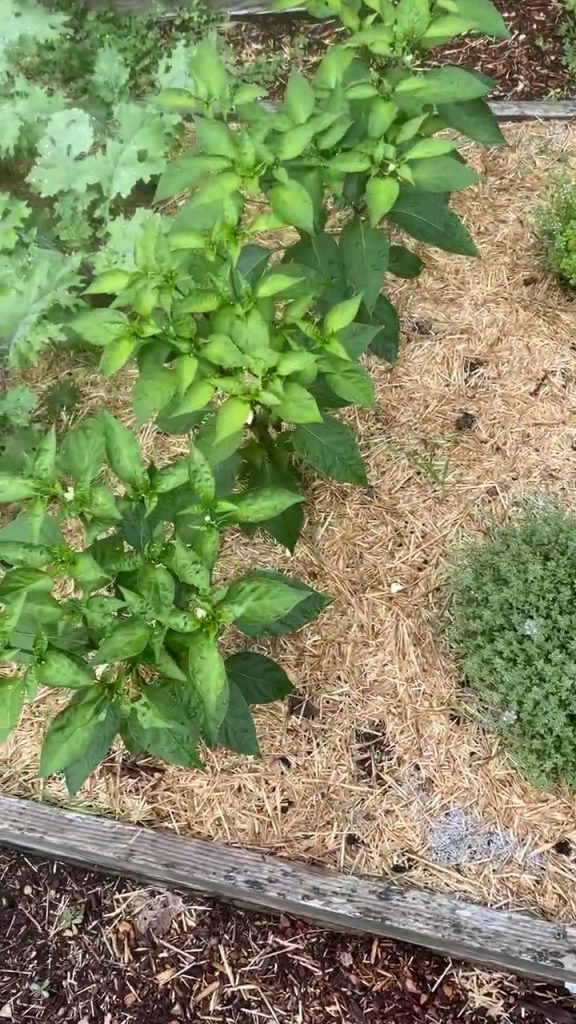 Jalapeno pepper plants surrounded by thyme. Last year they came as plugs, but next year we will start our own seedlings.

2. A Variety of Peppers

We love the heat of habaneros and jalapeños. Chef Rob uses plenty of peppers in his sauces, like in his spicy Mussels Cioppino. I use jalapeños to brighten up my spicy homemade kimchi. These plants need a long time to bulk up and create branches heavy with gorgeous fruit. I think the plant is also very ornamental and decorative. Can you imagine dried peppers in an autumn wreath? This year I will experiment and wait until March to get these seedlings started, instead of planting them late in the summer like I did last year. See, I told you we made lots of mistakes in our first year.

3. A Variety of Tomatoes

We had great success growing heirloom tomatoes with their big luscious pleats and the exotically colored pink boar tomato. We served them in our kitchens all summer and most of fall. Next year, I promised Matthew to plant some smaller cherry and grape-sized tomato seeds. Sungold and bright red cherry tomatoes will be just the thing for the salads he craves in the summer. Tomatoes really thrive in the humid and sunny spot on the slope just outside of Jessica’s. This time I will try starting seedlings indoors instead of buying plugs from the local garden center. I have to admit that it’s nice to plant the neat and lush seedlings fresh from the nursery, but there’s something more noble about starting your own seeds. 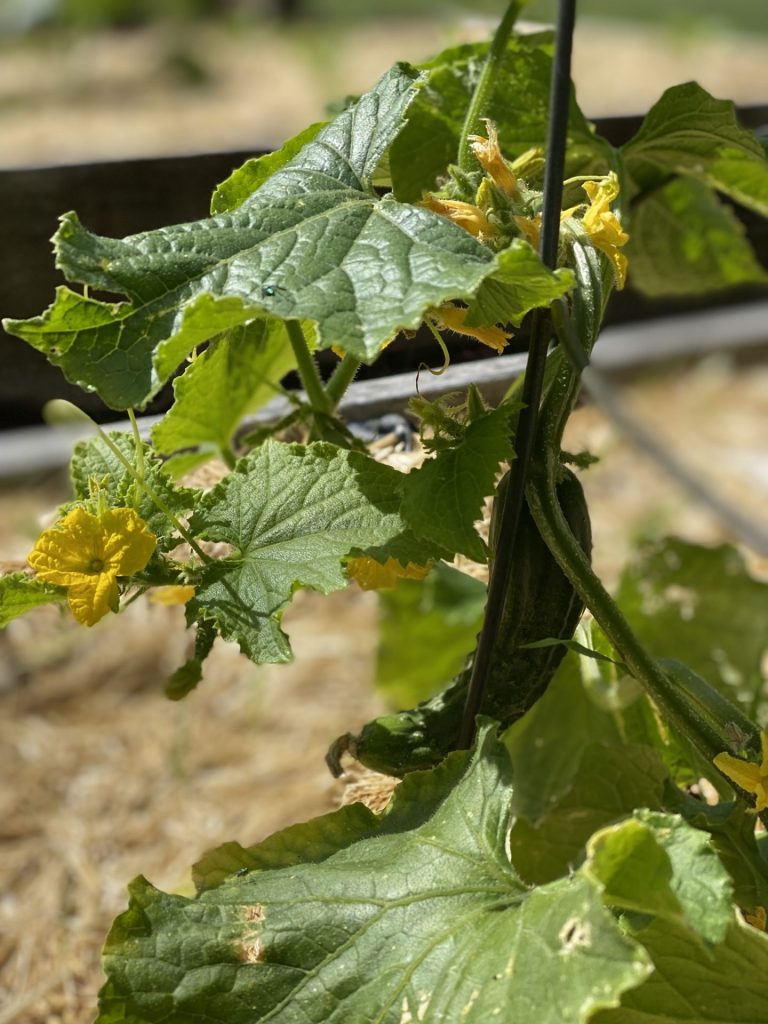 These cucumbers provided weekly fruit for the bartender to use as garnish in cocktails at Jessica’s.

I love cucumber kimchi and dill pickles. So it would be fun to see if we could grow a nice big raft of cucumbers for pickling. I also like the long, skinny Persian cucumbers which have such a nice skin, not bitter at all. The cucumber provided the bar with lots of garnishes. It’s an important crop for our operation. The problem is that in the past, I’ve gotten a kind of white blight on my cucumbers which eventually sickened the plant and it died. This year I will keep it under the most pristine conditions with plenty of fresh air blowing through.

5. A Variety of Pumpkins and Squash

We love to eat butternut squash and kabocha pumpkins on a regular basis. But more importantly, the inn purchases upwards of 200 pumpkins every fall for our autumnal decorations. Any gourds that we can grow will seriously help offset that cost. Last year our entire pumpkin harvested culminated in one beautiful gooseneck gourd with a thick bumpy yellow skin. On the flip side, the danger with a very successful squash like zucchinis and summer squash is that you can end up with way too big of a harvest for any community to handle. Matthew says that his parents would leave them on the porches of unsuspecting neighbors who would have to accept these orphans of summer whether they wanted to or not. Serena has a solution for that: Make kimchi out of it.

This plant not only tastes amazing, it’s a beautiful ornamental plant. I like how they use this tall and flamboyant plant to decorate the exterior landscape of Middlebury Natural Foods Coop. That has inspired me to grow a container filled with rainbow swiss chard for next year.

I love this sweet, crunchy, and nutritious cabbage, because it’s the essential ingredient for kimchi. Sure, you can make kimchi out of anything: cucumbers, kale, chives, squash, but napa cabbage is the vegetable that epitomizes classic kimchi. I grew a row of it last year, and without any kind of pest management, I was able to harvest about seven large heads which I used to make kimchi to share with the staff. But I felt like I lost way too much of it to pests, mostly earwigs and cabbage moths.

Next year, I plan on spreading diatomaceous earth and making organic earwig traps out of soy sauce and vegetable oil like my sister suggested. I will also probably net the crops, too, to prevent cabbage moths from landing on them. As pretty as those white butterflies look floating around the garden, their little green caterpillar babies really are hungry and will chomp huge holes out of the foliage.

Of course, this list of seven vegetables is just a start for daydreaming on a cold winter day in January. Eventually we will have to turn our planning mind to the existing perennials that serve our kitchen like chives, tarragon, and mint. We will also need to plan our cut flower garden so that we have plenty of blooms to decorate our inn and restaurant. And then there is the numerous beds filled with blooming perennials which might need enhancements with low-growing annuals around the borders.

But for now, we can curl up with the dogs on the sofa and tune into another episode of Gardener’s World at 50.

A Walk in the Woods While Reading Poems

It was the perfect day for a meditative stroll in the woods: Reading poems and enjoying the winter landscape. My sister, Mirena, and her friend, Shawn, were visiting us for the holidays. We weren’t ready for a full day of skiing and snowmobiling. We had something quieter and… Read More