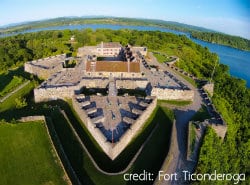 When history comes alive you can’t help but be drawn in and picture yourself in that time or scene—the sights, the sounds, the people, the action…imagining what it was like to be there. Fort Ticonderoga is a true historical gem we encourage you to visit that is just under an hour away from our inn. This fort brings the past to life and a day spent here will bring a new appreciation for the fort’s role in American history.

Only open May to November, Fort Ticonderoga is an 18th Century star fort—meaning it was built in the shape of a star. The star style fortress was designed in mid-15th century because the typical ring or square shape was too vulnerable. The star shape allowed easier attack on the enemy and less damage from incoming cannon fire. Fort Ticonderoga was built by the French between 1755-1757 during the French and Indian War. In addition to seeing conflicts between France and Great Britain, the fort also played an important role during the American Revolutionary War.

There really is something for everyone here whether you are a passionate history buff or not. The fort 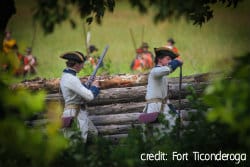 is steeped in American History and the interpreters that span the grounds are very knowledgeable and engaging and really make learning fun while you are there. There are several daily tours and demonstrations that you can choose from that include musket firing, fife and drum corps, and tours of the gardens to name a few. A favorite is the Mount Defiance: Witness to History Tour that brings you to the summit of Mount Defiance where you will get a birds-eye view of the military landscape and also learn more of the fort’s history. There are also several workshops and seminars coming up this fall. This is a place where you can take your time, enjoy the trivia and hands on exhibits, and have a delicious lunch in the café. The layout of the fort is easy to get around and you won’t run out of things to see and do.

If you are thinking a fall getaway to Middlebury, VT is exactly what you need to cure the end of summer blues, come on over to see this incredible fort and spend the weekend at our classic Vermont country inn!

Halpin Covered Bridge in New Haven. Photo courtesy of Addison County Chamber of Commerce. Did you know that Vermont has the highest density of covered bridges in the country? If you are looking for a scenic road trip this fall, we suggest combining a look at the beautiful foliage with… Read More