This was to be an interesting day for me at the beginning.  Great ride through the Fredricksburg Battle Field.  I was to early for the visitors center but it was to be a long day so there was no time.  The route avoided the busy highway 1 by going west out around Quantico Marine base, this added about 20 miles but was the safest.  Well supposed to be. I was amazed at the developments out ther, The Virginia suburbs keep sprawling.  It was the hottest day yet, we’ll at least the mid 90 felt that way. The closer I got to the fort which is along route 1 the busier the traffic got.  Roads opened to 6 lanes and it was constant housing developments and  shopping centers.  Not an inviting place to be riding a bike nor were the drivers interested in giving me any room and traffic was very heavy.I struggled some with the heat and distance but was able to phone into an innkeepers meeting for an hour.  The blue tooth on my helmut is fabulous.  I can take calls over the  helmut ear piece yet still hear traffic noise which is very important. I was very happy to arrive at the first Ft Belvoir Gate, a base that I was stationed at 1994-96.  A New England friend Ray Erickson picked me up for the night.  I had a fabulous time with Ray, Lisa and Sam with a great dinner.  They even prepared home made energy bars for me to take which are better than any commercial ones I have ever tasted.  It was a great night and tomorrow it is the ride through DC!  This is the early start sunrise. 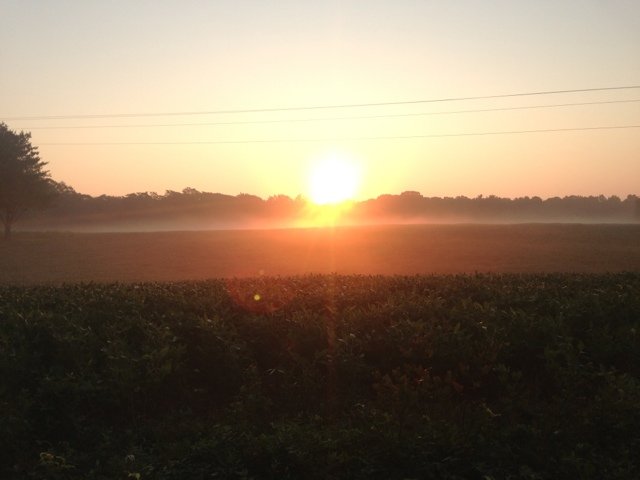 Well this turned out to be a day!!!  The goal was 80 plus to an off route stay in Owings Mill Md.  So it started great by Ray dropping me off at the Ft Belvoir Gate at 6:45. Then a ride through the Ft itself.  As I have said I… Read More