The early morning ride off the Island was along a newly paved and very quiet roads. Once off the island I was on a road that followed the Cape Fear River all the way to Wilmington.  The road was a little busy but very pretty with nice shoulders and designated a bike route.  The route through Wilmington was  an industrial area, then through the not yet open down town then out through nice neighborhoods and back out into the wilderness.  My goal for the day was to stay on Camp Legeune Marine Base, which was along the route.  At 42 miles I had lunch at a subway and called for a reservation at the Bachelors Officer Quarters on the base.  The ride was next along 10 miles of ocean beach and I crossed the inland waterway twice, all with a tail wind.  I departed the route and went 3 miles to a gate at the Base.  The guard laughed and said I had at least 10 more miles to get to the Main side of the base, a ride which took me along nice roads through the massive training areas.  This base is Massive!  Since the Quarters were not near places to eat I stopped at an on base Wendy’s for dinner.  This was next to a base shopping area that rivaled a mall and had numerous fast food options.  It was 5:30 and the traffic was heavy.  I am amazed at the size of this.  After almost 20 miles on the base I arrived at the Quarters!  A two room suite fit for a very tired retired Navy Officer!  Then the thunderstorms came and dumped the rain! Nice to be inside.  My ride tomorrow is only about 50 miles so I will enjoy this room and sleep in.  My legs are sore and fatigue has set it! Pictures of the waterway. 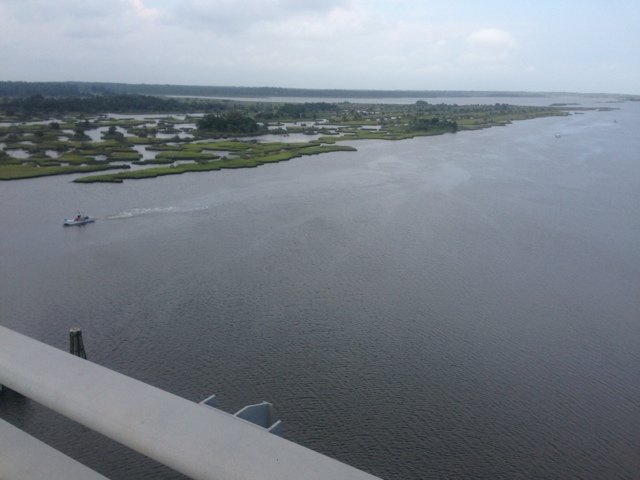 Today was a planned short day due to the distance after Bridgeton to the next lodging.  So I took advantage of the short ride and great Camp Lejeune accommodations.  I slept until 7:30, took my time, did the blog, ate some breakfast and was on the road at 10:10. Read More