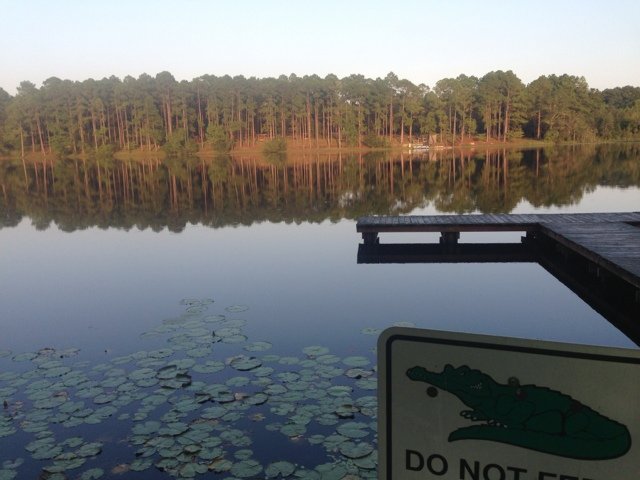 Getting ready to leave this morning from the fabulous Knox hotel.  Ms Blanche was waiting for me at the front desk just before 7:00 a.m.  Sunrise is at 7:00 so an early start is the best. Ms Blanche is not only wonderful but very funny.  We exchanged one liners and were both laughing! She had a bag of fresh boiled peanuts for me and even held my bike so I could put air in the tires. We hugged goodbye and she said I was one of the best guests she has had.  That’s good for me being an Innkeeper!  The ride was through some tough 2-lane highways but mostly back country roads with pine forests, planted for paper making, some of which were being cut 5 at a time and loaded onto the trucks.  I also rode past many fields of peanuts and large pecan trees.  I arrived in Reidsville at about 5:00 p.m. with the temperature at 94 degrees; the temperature is not bad as long as the bike is moving.  This was to be my first night camping, and it was at a GA state park near the town.  Since it was a mile walk from the campsite to food, I ate prior to entering the park.  And just outside the park was a Dairy Queen.  Not sure it gets better. Those who know me know my love of DQ! The park was very nice on a small  lake, and very quiet with only 2 other campers.  Set up went well but it was hot.  Sitting in the tent was also hot, even at 10:00 p.m., but cooled off later as I woke and got into my very light silk sleeping bag liner. Tomorrow is either a 35 mile ride or 115, due to availability of places to stay; I’ll take the 35.  The people of Georgia are wonderful, very friendly.  Many ask me questions and wish me a safe ride.  A Pepsi truck driver gave me 2 bottles of water and offered as many as I could carry.  Riding solo is somewhat lonely but people from Georgia are great!

Well camping out was not to bad, just lacks a good bed so sleep was a little rough. I have a 1 man tent that holds all my gear and weighs about 2.5 pounds, sleeping bag less than a pound and pad less than a pound. They pack small… Read More